Automated Delivery: Is the Future Closer than You Think?

Will final mile robotics save financial and environmental costs?

Despite commercial EV’s, cargo bikes and pick up, drop off (PUDO) parcel lockers becoming commonplace in our towns and cities, we could still see an increase in CO2 emissions by almost a third and increased congestion. More last mile deliveries means a bigger carbon footprint. With no decline expected from the 2020 ecommerce boom, global businesses must adapt to provide sustainable delivery solutions that meet rising consumer expectation – without the environment paying the price.

We all quickly became accustomed to the convenience of next day, same day and contactless deliveries as the ecommerce sector achieved 3-5 years projected growth in just 12 months. This accelerated demand for even faster, often free delivery, as retailers offered more in an attempt to secure their position in a highly competitive marketplace.

Faster delivery times caused a bottleneck in the last mile delivery system – finding sustainable solutions for this is one of the biggest challenges faced by the logistics sector. According to recent research by technology consultants, Accenture, final mile logistics still account for 53% of total shipping costs.

With no signs of slowing down, ecommerce continues to grow. The World Economic Forum forecasts that in Tokyo, final mile deliveries will increase by 85% by 2030. This would require a 71% rise in delivery vehicles that would be traveling 25% more. The percentages are slightly lower for suburban areas, 75% and 51% respectively, but the distances between deliveries are greater and so are the emissions. This is reflected in cities across the planet.

If nothing action is taken, the world will see a 35% rise in CO2 emissions by 2030 as a direct result of increasing urban deliveries.

The benefits of industry collaboration.

In addition to the environmental and health benefits, collaboration will lower operational costs, improve speed, efficiency, and customer service. New business models and joint delivery systems, such as multi-brand urban consolidation centres, can share systems to sort increasing parcel volumes, optimising deliveries to the same micro-fulfilment hub or neighbourhood. This also helps businesses share costs of adoption such as the mapping technologies required for robotic deliveries.

The appropriate use of robotic technology.

Different interventions, policies and infrastructures will be required for different geography’s, locations and population densities. What works in central urban areas, may not in sub-urban or remote regions.

From recording cars entering Clean Air Zones to air pollution sensors, the world’s cities are becoming smarter. Delivery droids may sound like a creation by George Lucas but imagine a robot ‘knocking’ on your door with a Sunday morning breakfast delivery that you ordered online minutes before.

Equipped with built-in cameras and ultra-sonic sensors, autonomous shipping robots can carry packages of up to 100kgs and could deliver from store to door within 15-30 minutes. They can avoid pedestrians, cars and even wait at red lights. Operated safely using a remote management system, they travel at a slow walking pace of around 4-6 km p.h for a human to intervene remotely, if needed. Trails of the Cleveron 701 in Estonia have shown that one operator can monitor ten devices at once. The robotic parcel developer is the first company to be granted a licence in the EU and mass production is scheduled for 2023.

Japan Post began testing their Panasonic-built logistics robot in September 2020 on the streets of Fujisawa, a smart city on the edge of Tokyo. Ecomms giant, Rakuten started its Yokosuka city trial shortly afterwards in December. The company hopes that their robots will assist the city’s aging population who have been struggling with its steep streets. It’s also hoped that they will help solve productivity issues, such as maximum driving time per day. Labour shortages can also be eased. In the U.S, driver shortages are estimated to reach 160,000 by 2028, whereas Japan’s shortfall is projected to increase to 278,000 by 2030.

Similar sustainable solutions have been approved in the U.S and the EU and self-driving robots are already on the streets in Shenzhen, China. The Japanese government has approved the use of autonomous robots on its roads with close human contact. However, it plans to ease restrictions; creating new operational policies for the use of robots in shared spaces to encourage adoption.

This will help Ford understand how road users would interact with a driverless van and how autonomous vehicles can benefit operations. Ford’s MoDe:Link software interacts with dispatch management systems and courier apps so street porters and cargo bike operators can meet the centrally located mobile distribution hubs.

The project follows the successful ‘warehouse on wheels’ trial between the two businesses in 2020. The results showed that one van meeting four street porters could make as many deliveries as five individual courier vans and drivers. Wider adoption could enable a two-thirds reduction in fleet size.

Cost-effective, remote location logistics. Drone testing, pilots and R&D has been ongoing for years, but you now read regular updates.

Remote locations require greater distances to reach residents and to greater distances between deliveries, resulting in higher emissions. Autonomous cargo drones can possibly be a real game-changer when it comes to remote logistics.

In the past week we have read that DHL has discontinued its parcel drone development project “Parcelcopter” which commenced back in 2013. In addition Amazon hit the news with reports that changes were being made within Prime Air. There were mixed reports about the continuation of the UK drone delivery operations, but one stated that Prime Air will continue to have a presence in the UK and is currently moving from an R&D phase to an operations phase, and Amazon is still working toward its goal of making deliveries to customers by drone within 30 minutes.

Tesco has recently agreed to ramp up their 2 minute drone grocery delivery service in Southern Ireland. Tesco has – via the Manna app – been offering the 10,000 residents of Oranmore, Galway living within 2km of its superstore, small basket delivery by drone as part of trial which started in September last year. Combined items must not be more than 2kg in weight and must “fit inside a shoebox”. The latest news identifies an expansion plan into a location with a population of around 40,000 people.

Royal Mail is also about to complete its trial of out-of-sight autonomous scheduled drone flights from the UK mainland to remote locations on the Isles of Scilly. Funded by the government as part of its Future Flight Challenge, the unmanned aerial vehicle (UAV) can carry up to 100kg’s of PPE, Covid-19 testing kits and other mail. A smaller drone will then transport items to a number of drop-off points.

In partnership with Hellmann Worldwide Logistics, the long-range Dronamics cargo drone will first take flight in the EU where current legislation allows cross-border flights. The unmanned devices can carry up to 350kg and have an unrivalled range of 2500km. The first routes for regular scheduled flights are planned as early as 2022.

Beyond ecommerce, drones offer rapid, remote delivery at a competitive cost. This is providing huge life-saving potential for healthcare and humanitarian aid with fast deliveries of blood, organs, snakebite serum and even emergency defibrillators summoned from a smartphone. A successful partnership between the UPS Foundation, Zipline and Gavi, the global vaccine alliance is now delivering bloods and vaccinations to rural Rwanda.

Batteries can now safely accommodate a 12-hour flight with reserves and the cost of a 10-mile flight is now down from $7.80 to just 25cents. 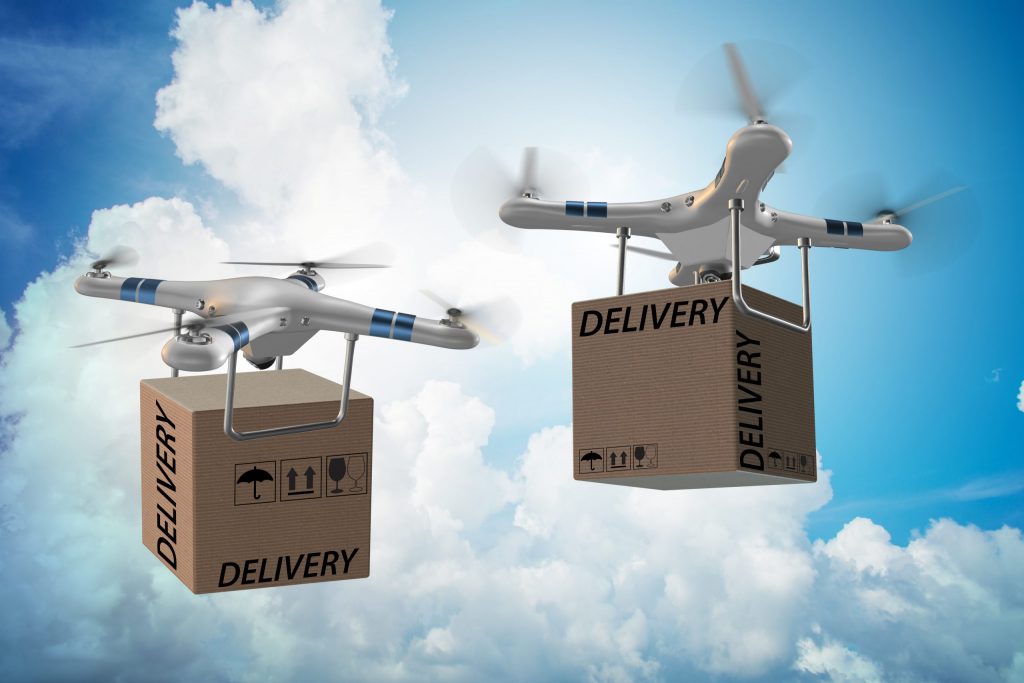 Previously seen as futuristic, these sustainable autonomous technologies have the potential to substantially reduce the cost of the most expensive element of the supply chain, increasing productivity of last mile deliveries through automation.

Falling costs of batteries and manufacturing along with changes to operational legislation means that those last mile logistics providers who prioritise the adoption of driverless vehicles, autonomous robots and delivery drones today, will reap the benefits tomorrow from their large cost-effective fleet.

Robotics will resolve some of the biggest environmental concerns in our urban and suburban areas and provide fast, cost-effective deployment with real-world lifesaving potential for remote communities. However, businesses must collaborate to synchronise standards, drive business efficiencies to successfully redefine the entire final mile ecosystem – creating a more convenient, efficient and sustainable all-delivery society.

We find ways to unlock value and work towards a better environment for us all. We are with you on the journey to reaching your sustainable development goals.

Our mission is to Decarbonise, Electrify and Optimise the last and middle mile logistics space